An Indian poet and dramatist, Kalidasa lived sometime between the reign of Agnimitra, the 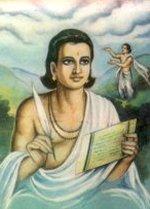 second Shunga king (c. 170 BC) who was the hero of one of his dramas, and the Aihole inscription of AD 634 which praises Kalidasa’s poetic skills. Most scholars now associate him with the reign of Candra Gupta II (reigned c. 380-c. 415).

Little is known about Kalidasa’s life. According to legend, the poet was known for his beauty which brought him to the attention of a princess who married him. However, as legend has it, Kalidasa had grown up without much education, and the princess was ashamed of his ignorance and coarseness. A devoted worshipper of the goddess Kali(his name means literally Kali’s slave), Kalidasa is said to have called upon his goddess for help and was rewarded with a sudden and extraordinary gift of wit. He is then said to have become the most brilliant of the “nine gems” at the court of the fabulous king Vikramaditya of Ujjain. Legend also has it that he was murdered by a courtesan in Sri Lanka during the reign of Kumaradasa.

Kalidasa’s second play, generally considered his masterpiece, is the Shakuntala which tells the story of another king, Dushyanta, who falls in love with another girl of lowly birth, the lovely Shakuntala. This time, the couple is happily married and things seem to be going smoothly until Fate intervenes. When the king is called back to court by some pressing business, his new bride unintentionally offends a saint who puts a curse on her, erasing the young girl entirely from the king’s memory. Softening, however, the saint concedes that the king’s memory will return when Shakuntala returns to him the ring he gave her. This seems easy enough–that is, until the girl loses the ring while bathing. And to make matters worse, she soon discovers that she is pregnant with the king’s child. But true love is destined to win the day, and when a fisherman finds the ring, the king’s memory returns and all is well. Shakuntala is remarkable not only for it’s beautiful love poetry, but also for its abundant humor which marks the play from beginning to end.

The last of Kalidasa’s surviving plays, Vikramorvashe or Urvashi Conquered by Valor, is more mystical than the earlier plays. This time, the king (Pururavas) falls in love with a celestial nymph named Urvashi. After writing her mortal suitor a love letter on a birch leaf, Urvashi returns to the heavens to perform in a celestial play. However, she is so smitten that she misses her cue and pronounces her lover’s name during the performance. As a punishment for ruining the play, Urvashi is banished from heaven, but cursed to return the moment her human lover lays eyes on the child that she will bear him. After a series of mishaps, including Urvashi’s temporary transformation into a vine, the curse is eventually lifted, and the lovers are allowed to remain together on Earth. Vikramorvashe is filled poetic beauty and a fanciful humor that is reminiscent of Shakespeare’s A Midsummer Night’s Dream.

In addition to his plays, Kalidasa wrote two surviving epic poems Raghuvamsha (“Dynasty of Raghu”) and Kumarasambhava (“Birth of the War God”), as well as the lyric “Meghaduta” (“Cloud Messenger”). He is generally considered to be the greatest Indian writer of any epoch.