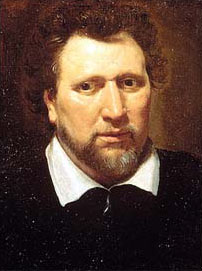 Ben Jonson was one of the leading literary figures of his day, Johnson was an associate of Shakespeare and J.Donne. He was an accomplished playwright and critic. He was born in 1572, the son of a clergy but his father died before he was born. Educated at Westminster School he left to join his step-fathers trade of being a brick layer. However he did not like this so joined the army. On his return from Flanders he married and earned his living from joining a theatrical group and writing plays.

In 1597 he was imprisoned for his part in writing the play ‘The Isle of Dogs’ the play was considered seditious by the authorities. After being released for this crime Johnson got involved in a duel and killed the other partner. He was tried at the Old Bailey for murder and narrowly escaped the gallows. During this time he converted to Roman Catholicism which became increasingly unpopular after the gunpowder plot of 1605.

Ben Jonson had a fiery temperament and could be harsh critic of fellow play writers. However his plays, especially comedies such as “Volpone, or the Fox” were widely regarded. In 1616 he was appointed Poet Laureate, a prestigious position with a substantial pay.