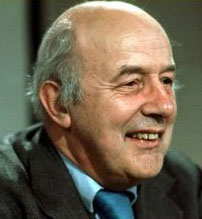 John Betjeman 1906 – 1984 became the most popular British poet of his age. He received countless awards and yet poetry critics have often struggled to characterize and criticize his poetry which evokes a variety of responses.

Brought up in Highgate Junior School in London, he was briefly taught by T.S.Eliot. He then went on to study at Malborough and later Oxford University. Throughout his childhood he developed a certain defensiveness. Firstly he was very sensitive about his German sounding name, this was particular difficult during the war years of 1914-1918. (It is worth remembering the King of England changed his German name). Betjeman also had a difficult relationship with his father. His father had high hopes he would follow him (and 4 previous generations) into the furniture making business. However Betjeman was never interested in a career in business striving to make a living though poetry and literature. This proved to be a sore point between the two as his father struggled to reconcile the decision of his father. After his father’s death he wrote about this in some poems

‘So looked my father at the last
Right in my soul, before he died,
Though words we spoke went heedless past
As London traffic-roar outside.’

– From A Child III

Poems such as this show Betjeman’s sensitive side and ability to move the reader. But in addition to this style of poetry Betjeman is perhaps best remembered for his quirky, funny poetry. For example through his light poems like ‘Slough’ and ‘How to get on in Society’. It is these that made him a populist poet and frequently get voted for in polls of the nations favourite poems. But this often sat ill at ease with literary critics. There has been surprisingly little academic interest in Betjeman since his passing. Academics have preferred to study the more serious modern poets such as Eliot and Pound. Philip Larkin wrly commented that ‘The quickest way to start a punch up between two British literary critics is to ask them what they think of the poems of Sir John Betjeman.’

A lot of the literary reserve to Betjeman stems from his preference for making light of situations, turning things into jokes. This jokiness or ‘campness’ as Andrew Motion calls it could stem from a certain defensiveness stemming from his childhood. However to Betjeman humour was an important aspect of his own self expression. Writing to his father in 1929 he wrote:

‘Often most serious feelings are expressed in a joke. I very rarely talk about what I really feel.’

Another notable feature of Betjeman’s poetry was his search for a link with the safety of tradition. He frequently uses images representing safety of the past. He is also a poet who loves to examine everyday images and things.

This poem symoblises some of Betjeman’s preferences in his poetry.

I made hay while the sun shone.
My work sold.
Now if the harvest is over
And the world cold
Give me the bonus of laughter
As I lose hold.’