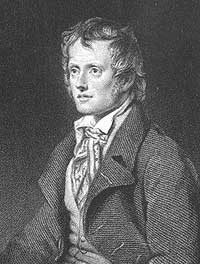 John Clare was born to a poor labouring family in Northamptonshire. His education did not extend much beyond basic reading and writing, and he had to start work herding animals at the age of seven. This was not a promising start for a future writer, but in his early teens he discovered The Seasons by James Thomson and began writing poems himself.

His first love, Mary Joyce, was the daughter of a wealthy farmer; their separation caused Clare great pain, and it contributed to the sense of loss which pervades much of his poetry

In 1820 he married Martha Turner and published his first book of poems. He was described as ‘John Clare, a Northampton Peasant’ on the title-page, and the current fashion for ‘rural poetry’ brought him some celebrity in London. He made friends with Charles Lamb and other literary figures, and was granted the sum of £45 a year by wealthy patrons.

The vogue for rustic poets did not last long however, and his popularity faded during the 1830s. The situation was made worse by his publishers, who insisted on ‘correcting’ Clare’s individual style and use of dialect, to make his verse fit contemporary notions of poetic convention. Clare’s attempts to write like other poets of his day, as well as his financial worries, put tremendous strain on his mind, and in 1837 he was admitted to a mental asylum in High Beach, Epping.

He escaped from the asylum in 1841, and walked home to Northamptonshire, under the delusion that he would be reunited with Mary Joyce there. A few months later he entered Northamptonshire General Asylum, where he lived for the rest of his life, still writing poems when his mental health permitted. The asylum poems are among his best known works, but the haunting descriptions of rural landscapes in poems such as ‘The Flitting’, ‘Decay’ and ‘Remembrances’ are more typical of the true character of his poetic voice. ..