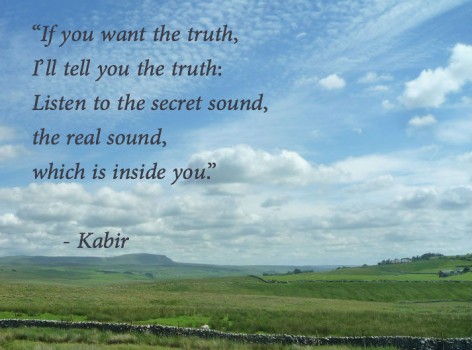 The social and practical manifestation of Kabir’s philosophy has rung through the ages. It represented a synthesis of Hindu, and Muslim concepts. From Hinduism he accepts the concept of reincarnation and the law of Karma. From Islam he takes the affirmation of the single god and the rejection of caste system and idolatry. The basic religious principles he espouses are simple. According to Kabir, all life is an interplay of two spiritual principles. One is the personal soul (Jivatma) and the other is God (Paramatma). It is Kabir’s view that salvation is the process of bringing into union these two divine principles.
Kabir is a very important figure in Indian history. He is unusual in that he is spiritually significant to Hindus, Sikhs, and Muslims alike. Kabir openly criticized all sects and gave a new direction to the Indian philosophy. Kabir touches the soul, the conscience, the sense of awareness and the vitality of existence in a manner that is unequalled in both simplicity and style.

It is for this reason that Kabir is held in high esteem all over the world. Another beauty of Kabir’s poetry is that he picks up situations that surround our daily lives. Thus, even today, Kabir’s poetry is relevant and helpful in both social and spiritual context. Following Kabir means understanding one’s inner self, realizing oneself, accepting oneself as is, and becoming harmonious with one’s surroundings.

Kabir has written much poetry and song. All of Kabir’s recorded verses are in Hindi. His lyrics are characterised by a free use of the vernacular, and is unfettered by the grammatical bonds of his day. It is this quality which has made his philosophy accessible to generations of Indians.