The Poet Seers » Rumi » Like This – Odes of Rumi 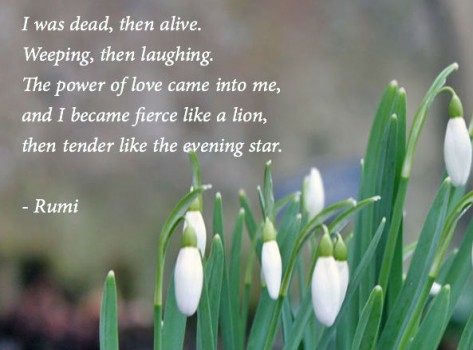 An intrinsic aspect of Rumi’s life and spiritual poetry is his divine friendship with the great Mystic; Shams of Tabriz. Shams and Rumi were kindred spirits, sharing a common mystical bond that transcended ordinary human relationships. As Rumi said of Shams in Ode 3097:

“I won’t try to talk about Shams.
Language cannot touch that Presence.”

After Shams passing, Rumi began his most creative period of writing poetry and often Rumi would refer to Shams as a way of offering gratitude to the inspiration he received from his friend and teacher . These Odes by Coleman Barks focus on poems in which Rumi mentions or alludes to his spiritual mentor, Shams of Tabriz.

Extracts from introduction to

“These poems are spontaneous unfoldings into a current, and like the best love poems of any tradition they melt into their being drawn, even as they keep a fierce reserve.”

“An intensity seals the lips. When water begins to boil, the cook puts a lid on the pot. Rumi’s Silence is that of the chef, who hands you a spoon to let you taste, now that the recipe-reading is over. The Silence becomes an inward communion, an experience beyond any doctrinal description.”

The poems in this section are taken from:

Republished with permission of the author.