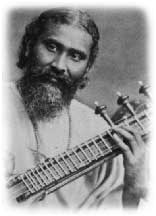 Pir-o-Murshid Hazrat Inayat Khan was born in Baroda, India in 1887, into one of the most musical families in India. Inayat’s grandfather, Maula Bakhsh was known as the ‘Beethoven of India,’  This was because he was the first to master the music of both North and South India.

Inayat himself showed exceptional musical talent. He had a beautiful voice and was noted for his exquisite vina playing. Inayat was soon in demand from many of the royal courts in India. However Inayat was not satisfied with a successful worldly life. He became intensely absorbed in spirituality and read sacred books with the greatest devotion.
Inayat himself said:

“I read the lives of the founders, the prophets, the seers, with as much reverence as their most devout adherents. This brought me the bliss of realization of the One truth which all religions contain as different vessels may yet hold the same wine. The different messengers most wondrously, by their very diversity of civilization, nationality and age, revealed the One source of inspiration. A human being, not generally understanding this and owing to blind dogmatic faith, has always clung to the originator of his or her own faith and ignored the new prophet. Not recognizing the manifold aspects of truth, thus all the racial and religious prejudices! “

During his spiritual searchings Inayat was drawn to the shrine of Khwaja Moineddin Chishti. Here despite the throng of devotees, Inayat felt great peace and calm.  Inayat took this as a sign to travel the Sufi path and therefore he started to  look hard for a teacher to guide him. Eventually in Hyderabad, he met Mohammed Abu Hashim Madani, a great Sufi murshid. Madani recognised Inayat to be a seeker of the highest order so  initiated him into the Christi path of Sufism.

Inayat spent the next 4 years absorbing the heart and soul of Mushid’s teachings, Inayat said these were amongst his happiest times.  Just before Abu Hasmim Madani passed away, he blessed Inayat and said to him

“Fare forth into the world, my child, and harmonize the East and West with the harmony of thy music. Spread the wisdom of Sufism abroad, for to this end art thou gifted by Allah, the most Merciful and Compassionate.”
Thus with a small number of companions, Inayat left for America and during the next sixteen years, Inayat founded the International Sufi Movement travelling widely, inspiring many with the teaching of the Sufi Message .

In America, he married Ora Ray Baker. Together they had 4 children including Pir Vilayat Inayat Khan who would later  succeed him as head of the International Sufi movement

After several years in America the family moved to England and then France. During his travels in different countries Inayat continued to write and publish various articles on religious unity and universal spiritual values

Hazrat Inayat Khan passed away on February 5th, 1927 in New Dehli, his tomb is located near Hazrat Nizamuddin Auliya, which is now a place of pilgrimage for Sufis from all over the world

“Hazrat” is an honorific; “Pir-o-Murshid” is an esoteric title, signifying the head of the Inner School of the Sufi Movement.