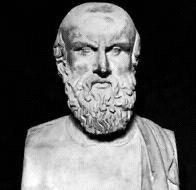 ( Aeschylus. 525/524 BC – c. 456 BC) was one of the three great ancient Greek writers of tragedy, the others being Sophocles and Euripides.

In the lives of the three great Greek tragedians, tradition is so mixed with fact, and the facts themselves frequently so uncertain, that it is hard to tell where one leaves off and the other begins. According to tradition the great service of Aeschylus to Greek drama had its beginnings in a dream. One night when he was watching his father’s flocks, the gods in a vision commanded him to write tragic dramas for their glorification in the religious festivals.

Whether there is anything of truth in the story or not, Aeschylus must have begun writing plays at an early age for we find him when scarcely twenty-five years old competing in the dramatic contests held yearly in honor of the god Dionysus. It was fifteen years, however, before he carried off first prize. Meanwhile, he had learned his craft so well that from his first success in 484 B.C. he continued to win almost continuously until his death.

The parents of Aeschylus belonged to the old Attic nobility so that family life and traditions tended to make him a broadminded conservative, both in politics and religion. The circumstance that his birthplace, Eleusis, was the center of the worship of the goddess, Demeter, probably is largely responsible for his keen religious consciousness, and the fact that in all his extant plays the unvarying motive is the relentless power of Fate and the ultimate justice of Providence.

Aeschylus spent a great part of his mature life at the court of Hieron, tyrant of Syracuse, returning to Athens to supervise the production of his dramas for the contests, in which he apparently competed alternate years. He continued to write up until the day of his death which, according to the story told, was caused by an eagle’s mistaking his bald head for a stone and dropping a tortoise on it to break the shell. But this tale we shall have to take with more than a grain of salt.

Aeschylus was the first dramatist to give dignity and meaning to tragedy. Also, as his own producer and stage manager, he designed special costumes for his actors; pioneered in the use of masks; enlarged the stage; and was the first dramatist to have any sort of setting for his plays. Altogether, it is probable that few men in the entire history of the theatre, have had such far reaching effect on their chosen profession as Aeschylus, Father of Greek Drama.