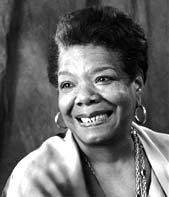 Maya Angelou (original name Marguerite Johnson) was born April 4, 1928 in St Louis, Missouri. Maya Angelou is one of America’s leading female contemporary Poets. However, Maya Angelou has also achieved much in the fields of theatre, acting, writing novels and also as a member of the Civil Rights movement.

Maya Angelou had a turbulent childhood but she was able to retell her experiences with great poignancy and effect in herbook ‘I know Why The Caged Bird Sings’ (1969) This book is a collection of stories from her childhood and this book made her one of the first African ‘ American Women to reach the best sellers list. ‘ I Know Why The Caged Bird Sings’ was also nominated for the National Book Award.

Despite the inequities of life as a child, Maya Angelou has been able to provide a positive message of humanity and hope. Maya Angelou has said that ‘ The honorary duty of a human being is to love’

‘ Love arrives
and in its train come ecstasies
old memories of pleasure
ancient histories of pain.
Yet if we are bold,
love strikes away the chains of fear
from our souls.’

From: Touched By An Angel

Maya Angelou married a South African freedom fighter and for a time lived in Cairo where she was the editor of the Arab Observer. However in the 1960s she returned to America and played a role in the civil rights movement. At the request of Martin Luther King she became the regional coordinator for the Southern Christian Leadership. She has been asked to work on behalf of Presidents Carter (National Commission on the observance of International Women’s Year) and President Ford (American Revolutionary Bicentennial Advisory Council. In 1993 President Clinton requested her to compose a poem for his inauguration. This poem ‘On The Pulse of Morning’ was read by Maya Angelou at his inauguration, to much critical acclaim.

As well as a poet and writer Maya Angelou has had a productive career in TV and film. She has written several prize winning documentaries such as. ‘Afro ‘ Americans in the Arts’.

The popularity of Maya Angelou has in large part been due to her ability to write about the many experiences of life with a vivid and engaging style that absorbs the reader. As Sidonie Ann Smith states from Southern Humanities Review:

“Her genius as a writer is her ability to recapture the texture of the way of life in the texture of its idioms, its idiosyncratic vocabulary and especially in its process of image-making,”

1966; Writer in residence at University of Kansas,

1974; Professor at Wake Forest University, – a position she currently holds

1975-76; Member of National Commission on the Observance of International Women’s Year.

1992 Woman of the Year, Essence Magazine,