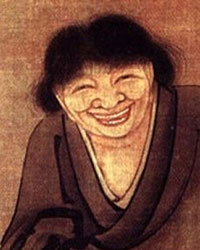 Han Shan (Cold Mountain) lived in China sometime between 630 and 830 CE. Since many writers refer to Han Shan as a late 8th Century poet, I will assume he flourished from around 750 to 800 CE.  Han Shan is one of those Taoist-Chan Sages who are reported to have enjoyed very long lives due in part to their sheer luck, all that fresh air, gruel, pure water, long daily walks, rugged individualism, and all those secret Taoist herbs and unusual exercises.

Han Shan was a hermit and poet of the T’ang Dynasty (618 – 906).
Red Pine tells us that political intrigue may have led the handicapped
young scholar-bureaucrat to flee the aftermath of the An Lu-shan Rebellion in 760 and retreat to the cold mountains of far eastern China – for his life.

Han Shan was considered, when an older man, to be an eccentric Taoist, crazy saint, mountain ascetic mystic, and wise fool.  He liked to play  pranks, tease, joke, and get friends laughing.

Most of Han Shan’s poems were written when he lived in the rugged
southern and far eastern mountains of China in what is currently   Fujiian (Fukien) Province.  He lived alone in caves and primitive
shelters in the rugged mountains in an area referred to as the  Heavenly Terrace (T’ien T’ai) Mountains.  Han Shan’s cave-hut was a long one day’s hike from the Kuo-ch’ing monastery in the T’ien
T’ai Mountains.

Little is known about all of Han Shan’s life, and he is somewhat of a legendary character.

The Road To Cold Mountain

People ask for the road to Cold Mountain,
but no road reaches Cold Mountain.
Summer sky-still ice won’t melt.
The sun comes out but gets obscured by mist.
Imitating me, where does that get you?
My mind isn’t like yours.
When your mind is like mine
you can enter here.

Here’s A Message for the Faithful

From The Collected Songs of Cold Mountain, trans. Red Pine

I Settled at Cold Mountain long ago,

I settled at Cold Mountain long ago,
Already it seems like years and years.
Freely drifting, I prowl the woods and streams
And linger watching things themselves.
Men don’t get this far into the mountains,
White clouds gather and billow.
Thin grass does for a mattress,
The blue sky makes a good quilt.
Happy with a stone under head
Let heaven and earth go about their changes.