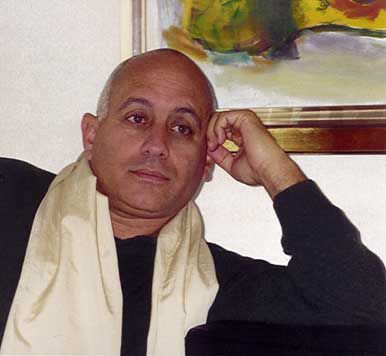 Descending from grandparents who travelled from homes in Hungary and Russia, silent lotus was born in America. He was raised in the small, unique community of Roosevelt, N.J, which was designed in the Bauhaus style in 1936 and was home to many renowned people in the arts. In his mid twenties he left for the island of St Maarten in the Caribbean to give priority to his talents as a visual artist.

Almost two years later, as crew of a 30 meter sailboat, he ventured across the Atlantic Ocean. From the Mediterranean he travelled overland through Europe and settled in the city of Rotterdam in the late 1970s. Under his birth name Chasan, he exhibited his paintings in galleries and museums. The oeuvre of his work he titled ‘Icons of Silence’ and one of these Icons’ was selected by a Tibetan Lama for the cover of a book about Bardo.

Inner silence became a pattern of growth present in him. His path, while including many continents, has been without a physical teacher or ashram. Somewhat similar has been the life of his brother, residing now for many years in India. While they share many interests perhaps one of the most beautiful is that sensititivity as healers.

‘Spiritual Sensitive Synthesis’ is how silent lotus refers to that which he has to offer to others. It is a gentle, loving presence. He feels that his highest example that can be expressed is truth and unconditional love in your own being