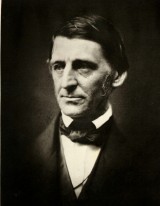 A thinker in the sublimest sense of the term is Emerson. His philosophy touches the core of all earthly problems. “Ends,” said he, “pre-exist in the means.” Hence what matters is to cherish our highest aspirations in all sincerity and determination and rest assured in the faith that these will realise themselves.

He came of poor parents, but had an indomitable will and an utter self-reliance. Strangely enough, he was taught from within to be cheerful in the face of poverty. His father, William Emerson, a clergyman, passed away when Waldo was a boy of eight. Soon afterwards, the family was throw into extreme poverty. It came to such a pass that Emerson and his elder brother had to share a single overcoat to help them through the terrible winter. Obviously one of them had to stay indoors while the other was out-and who but the younger of the two was the unfortunate one? Waldo missed the attractions, affections and amusements of the outside world; but at the same time this isolation gave him an opportunity to plunge into the sea of knowledge.

Voraciously he studied. Plato’s Dialogues and Pascal’s Thoughts inspired all his moments. Later, impelled from within, he welcomed Spinoza and Montaigne along with his previous masters.

He had many antagonists. Hypocrisy and superstition were the worst of them. He fought and fought them, but success remained a far cry. He had also numerous friends. Truth and sincerity topped their ranks.

America, the fairest land of freedom, opportunity and progress, inspired in Emerson the thought that his countrymen should utilise all her divine gifts to strive for the most divine aims of life. Indeed, America will gain her true stature when she lives up to her philosopher-son’s towering aspirations.

Emerson’s love for the American student stemmed from his topmost aspiration:

“Our student must have a style and determination, and be a master in his own speciality. But having this, he must put it behind him. He must have a catholicity, a power to see with a free and disengaged look every object. “

In other words, he expected the American student to be a useful unit not only of the American nation but of the world-family in the making.

“The things taught in the schools and colleges,” Emerson strongly felt, “are not an education, but the means of education.”

For a student to be furnished with “the means” is to have thrown upon him the responsibility for continuing to educate himself until at last the finite and the Infinite within and without him are unified into an expanded personality.

No doubt philanthropy and charity have much to their credit. But most people are unconscious of the great limitations of these two virtues. Being a genuine lover of Truth, Emerson made bold to say: “Philanthropies and charities have a certain air of quackery.” Truly few, perhaps none, have imprinted on the tablets of their hearts the great teaching of the Bible:

“When thou doest alms, let not thy left hand know what thy right doeth. ”

For Emerson, poetry and philosophy were no mere intellectual embellishments. Philosophy was a dynamic factor in the shaping of his life. He was a true man of vision, and he used philosophy to sustain his vision and poetry to express it. His life was a happy blend of sublime dreams and creative gestures. He knew no compromise with his ingrained truth: “When he [the poet] sings, the world listens with the assurance that now a secret of God is to be spoken.” Does this not conform to the Indian definition of the poet as seer? Needless to say, Emerson’s high idealism lifted him far above his age.

On March 11, 1829, Emerson was awarded the post of Minister of the Second (Unitarian) Church in Boston. Even his worst enemy could not deny his remarkable gift of speech-making. But he later had to sever himself from the church as he failed to be at one with his congregation regarding his method of teaching. He simply left the church without attacking anyone. It was advisable, he thought, that his congregation should have another pastor according to their choice. But one of the reactionaries could not help saying, “We are sorry for Mr. Emerson, but it certainly seems as if he is going to hell.” Neither are we to forget the immediate retort made by a true seeker: “It does indeed look so. But I am sure of one thing-if Emerson goes to hell, he will so change its climate that it will become a popular resort for all the good souls of Heaven.”

Emerson’s love of God was too deep for form and convention. That was perhaps why he left his ministry in the Unitarian Church of Boston. People below his level of culture must be pitied. It is quite natural that they should have taken him amiss. Emerson seems to have sailed “strange seas of thought, alone,” with deep self-knowledge. Emerson’s truth, “To be great is to be misunderstood,” finds its exquisite parallel in Sri Aurobindo, the greatest Seer of India:

Whoever is too great must lonely live,

Adored he walks in mighty solitude;

Vain is his labour to create his kins,

His only comrade is the Strength within.

Happily, two great contemporaries, Lincoln and Emerson, offer an historic example of mutual appreciation. During the ever-memorable Civil War in America, it was Emerson’s inspiration that offered “the best and the bravest words.” He fully supported President Lincoln in his mighty undertaking, and addressed him as “the Protector of American Freedom.” Neither could the President remain silent. He honoured the seer in Emerson with his warm appreciation: “The Prophet of American Faith.”

“The Prophet of American Faith.” Yes, but more truly a Prophet of Universal Faith, a seer visualising the future in the living present:

One day all men will be lovers, and every calamity will be dissolved in the universal sunshine.

Excerpt from the Philosopher – Thinkers The Power-Towers Of The Mind And Poet-Seers: The Fragrance-Hours Of The Heart In The West