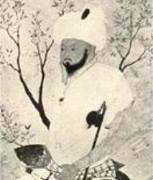 Mahmud Shabistari was one of Sufi’s greatest poets of the 14th Century. Like Rumi,  Shabistari lived in turbulent times. This period was often fraught with dangers, in particular the Mongol invasions brought much devastation. However Shabistari was able to write much poetry and synthesise much of the Sufi wisdom. He had a style similar to Ibn Arabi and expressed Sufi philosophy in a moving and simple language. As David Fieldler says of Shabistari

“ Shabistari possessed a unique genius for summarizing the profound and often complex teachings of Sufism in a beautiful, aphoristic, and concise fashion, which often leaves the reader speechless when the deeper meanings of his verse are grasped. “ (1)

Shabistari’s  poetry was inspired by his own mystical experiences. In a style unique to himself he expressed the universal truths and experiences shared by other the Sufi Poets; Rumi, Hafiz, Ibn Arabi, Attar and Rabia al Basri .

“Penetrate the heart of just one drop of water, and you will be flooded by a hundred oceans.”

Shabistari was a devoted Sufi but at the same time was not constrained by any social or religious ideology. In accordance with Sufi philosophy Shabistari taught that there are many ways to reach the common goal. – “The Paths are many the goal is one.”

“Behold how this drop of seawater
has taken so many forms and names;
it has existed as mist, cloud, rain, dew, and mud,
then plant, animal, and Perfect man;
and yet it was a drop of water
from which these things appeared.
Even so this universe of reason, soul, heavens, and bodies,
was but a drop of water in its beginning and ending.

…When a wave strikes it, the world vanishes;
and when the appointed time comes to heaven and stars,
their being is lost in not being.”

‘I’ and ‘you’ are but the lattices,
in the niches of a lamp,
through which the One Light shines.
‘I’ and ‘you’ are the veil
between heaven and earth;
lift this veil and you will see
no longer the bonds of sects and creeds.
When ‘I’ and ‘you’ do not exist,
what is mosque, what is synagogue?
What is the Temple of Fire?  (2)

The Secret Rose Garden by Shabistari Shabistari’s Secret Rose Garden (1317 A.D.) must be reckoned among the greatest mystical poetry of any time or land. Treating such themes as the Self and the One, The Spiritual Journey, Time and this Dream-World, and the ecstasy of Divine Inebriation, Shabistari’s work is a perennial witness to the capabilities and destiny of humanity. Stressing the One Light that exists at the heart of all religious traditions, Shabistari’s work is one of the clearest and most concise guides to the inner meaning of Sufism, and offers a stunningly direct exposition of Sufi mystical thought in poetic form: