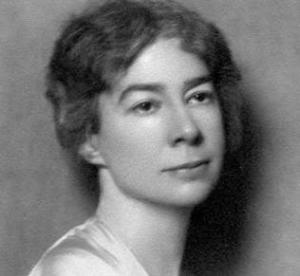 Sara Teasdale (August 8, 1884 – January 29, 1933), was an American lyrical poet. She was born Sara Trevor Teasdale in St. Louis, Missouri, and after her marriage in 1914 she went by the name Sara Teasdale Filsinger.

Sara Teasdale was born on August 8, 1884. She had poor health for most of her life, and it was only at age 14 that she was well enough to begin school. In 1898 she began attending Mary Institute, but switched rapidly to Hosmer Hall in 1899, where she finished in 1903.

Teasdale’s first poem was published in Reedy’s Mirror, a local newspaper, in 1907. Her first collection of poems, Sonnets to Duse and Other Poems, was published that same year.

Teasdale’s second collection of poems, Helen of Troy and Other Poems, was published in 1911. It was well received by critics, who praised its lyrical mastery and romantic subject matter.

In the years 1911 to 1914, Teasdale was courted by several men, including poet Vachel Lindsay, who was absolutely in love with her but did not feel that he could provide enough money or stability to keep her satisfied. She chose instead to marry Ernst Filsinger, who had been an admirer of her poetry for a number of years, on December 19, 1914.

Teasdale’s third poetry collection, Rivers to the Sea, was published in 1915 and was a best seller, being reprinted several times. A year later, in 1916 she moved to New York City with Filsinger, where they resided in an Upper West Side apartment on Central Park West.

In 1918, her poetry collection Love Songs (released 1917) won three awards: the Columbia University Poetry Society prize, the 1918 Pulitzer Prize for poetry and the annual prize of the Poetry Society of America.

Filsinger was away a lot on business which caused a lot of loneliness for Teasdale.  In 1929, she moved interstate for three months, thereby satisfying the criteria to gain a divorce. She did not wish to inform Filsinger, and only did so at the insistence of her lawyers as the divorce was going through—Filsinger was shocked and surprised.

Post-divorce, Teasdale remained in New York City, living only two blocks away from her old home on Central Park West. She rekindled her friendship with Vachel Lindsay, who was by this time married with children.

If Death is Kind

Perhaps if Death is kind, and there can be returning,
We will come back to earth some fragrant night,
And take these lanes to find the sea, and bending
Breathe the same honeysuckle, low and white.

We will come down at night to these resounding beaches
And the long gentle thunder of the sea,
Here for a single hour in the wide starlight
We shall be happy, for the dead are free.

There is no magic any more,
We meet as other people do,
You work no miracle for me
Nor I for you.

You were the wind and I the sea—
There is no splendor any more,
I have grown listless as the pool
Beside the shore.

But though the pool is safe from storm
And from the tide has found surcease,
It grows more bitter than the sea,
For all its peace.

When April bends above me
And finds me fast asleep,
Dust need not keep the secret
A live heart died to keep.

When April tells the thrushes,
The meadow-larks will know,
And pipe the three words lightly
To all the winds that blow.

Above his roof the swallows,
In notes like far-blown rain,
Will tell the little sparrow
Beside his window-pane.

O sparrow, little sparrow,
When I am fast asleep,
Then tell my love the secret
That I have died to keep.

My Heart is Heavy

My heart is heavy with many a song
Like ripe fruit bearing down the tree,
But I can never give you one —
My songs do not belong to me.

Yet in the evening, in the dusk
When moths go to and fro,
In the gray hour if the fruit has fallen,
Take it, no one will know.
– Sarah Teasdale