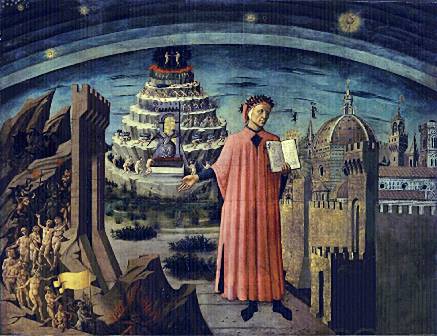 Born into a Guelph family (see Guelphs and Ghibellines) of decayed nobility, Dante moved in patrician society. He was a member of the Florentine cavalry that routed the Ghibellines at Campaldino in 1289. The next year, after the death (1290) of Beatrice, the woman he loved, he plunged into intense study of classical philosophy and ProvenÃ§al poetry. This woman, thought to have been Beatrice Portinari, was Dante’s acknowledged source of spiritual inspiration.
Dante married Gemma Donati, had three children, and was active (1295’1300) as councilman, elector, and prior of Florence. In the complex politics of Florence, he found himself increasingly opposed to the temporal power of Pope Boniface VIII, and he eventually allied himself with the White Guelphs. After the victory of the Black Guelphs he was dispossessed and banished (1302). Exile made Dante a citizen of all Italy; he served various princes, but supported Holy Roman Emperor Henry VII as the potential savior of a united Italy. He died at the court of Guido da Polenta in Ravenna, where he is buried.

Dante’s reputation as the outstanding figure of Italian letters rests mainly on the Divine Comedy, a long vernacular poem in 100 cantos (more than 14,000 lines) composed during his exile. Dante entitled it Commedia; the adjective Divina was added in the 16th cent. It recounts the tale of the poet’s journey through Hell, Purgatory, and Heaven, and is divided accordingly into three parts. In Hell and Purgatory Dante is guided by Vergil, through Heaven, by Beatrice, for whom the poem is a memorial. The work is written in terza rima, a complex verse form in pentameter, with interlocking triads rhyming aba, bcb, cdc, etc.

A magnificent synthesis of the medieval outlook, the Divine Comedy pictures a changeless universe ordered by God; its allegorical theme is the gradual revelation of God to the pilgrim. It is also a religious dialogue on the gradations of earthly sin and piety as well as on such topics as predestination and classical philosophy. The symbolism is complex yet highly rational; the verse is musical; and the entire work is one of great imagination. Through his masterpiece Dante established Tuscan as the literary language of Italy, surpassed all previous Italian writers, and gave rise to a vast literature.
Dante’s works also include La vita nuova [the new life] (written c.1292), a collection of prose and lyrics celebrating Beatrice and illustrating his idealistic concept of love; the Convivio (c.1304), an encyclopedic allegory praising both love and science; De monarchia, a treatise on the need for kingly dominance in secular affairs; and De vulgare eloquentia, on rules for the Italian vernacular. In addition, he wrote numerous lyrics, eclogues, and epistles