” Mirabai was a devotee of the high, higher, highest order. Among the saints of India, she is absolutely unparalleled. She composed many, many bhajans, which are prayerful songs to God. Each song Mirabai wrote expressed her inspiration, aspiration and sleepless self-giving. “

From an early age Mirabai felt an irresistible attraction and devotion to Sri Krishna. As a young child she was given a doll of Krishna, which she worshipped as if it embodied the living presence of Krishna. Although people misunderstood her, she considered Krishna to be both her best friend, lover and husband. Swami Sivananda said of Mirabai

‘It is extremely difficult to find a parallel to this wonderful personality – Mira – a saint, a philosopher, a poet and a sage. She was a versatile genius and a magnanimous soul. Her life has a singular charm, with extraordinary beauty and marvel.‘

Precise information about the life of Mirabai is hard to verify. However with the help of her poetry, and the writings of others; historians have pieced together the different elements of her life.

A key moment in the life of Mirabai was her arranged marriage to Prince Bhoj Raj. The Prince was the eldest son of a very influential Hindu family. The marriage gave Mirabai a very high social status. However Mirabai felt little, if any attraction, to the worldly comforts and pleasures of the Palace. Whenever she had the opportunity, Mirabai would escape from her daily duties to spend time in prayer and meditation on her beloved Krishna. Her soul felt a spontaneous and overwhelming love for Sri Krishna. Her poems speak of the unbearable pangs of separation she felt when she could not contemplate and see her Krishna. 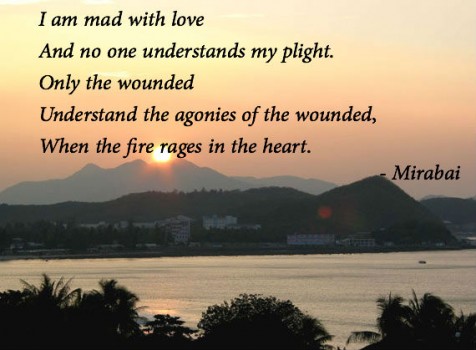 Unfortunately her spiritual intensity and religious inclinations were not in any way liked by her husband’s family. In fact, they sought to actively stop her spending time praying to Krishna. They felt her only duty was to her husband and the good image of the family. Members of the family started to spread malicious gossip and create physical hardships; but no matter what they did, they could not undermine the unwavering devotion and love that Mirabai had for Sri Krishna. On the death of her husband things only seemed to get worse. The remaining family tried to get Mirabai to commit Sati. Sati is the practise of voluntary suicide, which at the time was quite common amongst Hindu widows.

However, Mirabai refused, saying she was betrothed to Sri Krishna, and he alone was her real husband. After this incident, life got increasingly intolerable for Mirabai, so with the advice of various Sadhu’s she left the palace to live as a wandering sannyasin on the streets of Vrindaban. (Vrindaban is a city associated with Sri Krishna’s early life when he lived amongst the Gopi’s)

Only he knows the bitterness of love
Who has deeply felt its pangs.
When you are in trouble
No one comes near you:
When fortune smiles.
All come to share the joy.
Love shows no external wound.
But the pain pervades every pore
Devotee Mira offers her body
As a sacrifice to Giridhara for ever.

Mirabai’s saintly reputation spread throughout northern India and people looked upon her as an incarnation of Radha. Her devotional bhajans were infectious in their capacity to offer spiritual upliftment. Mirabai composed hundreds of poems in a simple, unpretentious style. They are full of intensity and transcendental spirituality. Through her poems / bhajans she expressed, with a powerful intensity, the spiritual fervour of an aspirant mad with the love of God. Her poems also reflect the strange fate she was born into:

Fools sit on thrones as kings,
While the wise beg their bread.

Mira’s lord is the courtly Giridhara:
The king persecutes the Bhaktas.

– Mirabai (Strange are the decrees of fate)

Mirabai is the most respected and loved poetess in the history of India. Many were inspired, by her example, to follow the devotional path of Vaishanvism.

– For love of the Dark One: songs of Mirabai / Andrew Schelling; Shambhala Publications, 1993.

– The devotional poems of Mirabai / translated with introduction and notes, A.J. Alston 1980