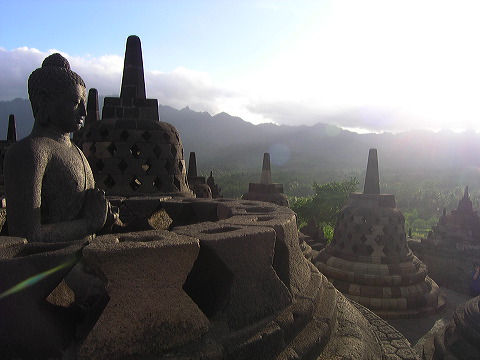 Buddhism is based on the teachings and life of Gautama Buddha. The Buddha was born as a privileged Indian Prince, named Siddhartha Gautama. As a young man he was shielded from the suffering and mortality of human life and given all the worldly privileges that his family could offer him. They wished to shield him from suffering because it was foretold that when the young prince came upon suffering he would renounce the world to live the life of an ascetic. However eventually Siddhartha ventured from the Palace into the outside world and for the first time came across death, illness and suffering.

This led the Buddha to question his worldly life. Although he had all of life’s material comforts these could no longer satisfy him. Therefore  Siddhartha Gautama  renounced the world and went in search of truth.

For many years Siddhartha practised severe austerities  bringing his body close to collapse, through constant fasting. However this did not bring him enlightenment. At one time a passing woman brought The Buddha some food and this revitalised his body giving him renewed energy to meditate. From this point onwards the Buddha decided to practise “The Middle Path” shunning both extremes of severe austerities and indulgence of desires.

Finally the Buddha achieved enlightenment under the Bodhi tree. For the remaining years of his life the Buddha travelled all over India spreading his message of the path to Enlightenment and Nirvana. His teachings attracted many followers and after his passing his teachings started to be written down, these formed the basis of Buddhism.

His contemporaries describe him as having a noble appearance, with a serene countenance and distinguished features. The Buddha was so tolerant that he did not even exercise his power to give commandments to his lay followers. Instead, his teachings were delivered in the form of advice or suggestions. The Buddha extended such tolerance to men, women, and all living beings. The Buddha’s teachings of tolerance and free inquiry and the suggestion to not accept his teachings for purely emotional reasons helped make the spread of Buddhism a peaceful one.

The Buddha opposed animal sacrifice and admonished his followers to extend their loving kindness to all living things, no matter how small. He held that no man had the power or the right to destroy the life of another since all living things shared a connection. He took care of his followers and paid daily visits to the sick. On one of many such occasions, he bathed and treated a monk who was suffering from dysentery and had been neglected by the other monks because he lay in his own excrement; the Buddha commented, “He who attends the sick attends me.”

Poems / Sayings by the Buddha