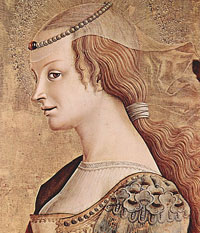 We know of Hadewijch only what comes from her writings. She wrote in the Brabant dialect of Middle Dutch, and she perhaps came from the area around Antwerp. She knew French and Latin and was familiar with contemporary chivalric poetry. She appears to have been a beguine, perhaps the mistress of a beguinage.

At some point she was criticized for her views, perhaps forced out of her community, and separated from women for whom she cared. Her need to keep in touch with them and to continue to teach and encourage them seems to have led to her writings: 31 letters (Brieven), 14 descriptions of visions (Visioenen), 45 poems in stanzaic form (Strofische Gedichten),and 16 to 29 poems in mixed form (Mengeldichten).

Hadewijch also compiled a “List of the Perfect,” naming 86 persons, living and dead, whom she described as “clothed in love”; the list includes a beguine who had been executed, probably in 1236. It is from the datable references in this list that Hadewijch has been assigned to the mid-1200s.