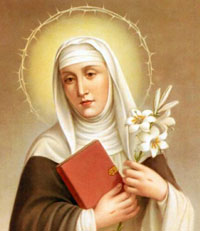 St Catherine (1347 -1380) was one of the great Catholic saints. She was said to have taken a sincere and profound interest in every body whom she met. Her saintly nature attracted many people to come to her for guidance. She willing gave solace to people who came with mental and emotional suffering. She once said,

“Strange that so much suffering is caused because of the misunderstandings of God’s true nature. God’s heart is more gentle than the Virgin’s first kiss upon the Christ. And God’s forgiveness to all, to any thought or act, is more certain than our own being.”

The 25th child of a wool dyer in northern Italy, St. Catherine started having mystical experiences when she was only 6, seeing guardian angels as clearly as the people they protected. Her parents wished her to get married but instead she became a Dominican tertiary when she was 16, and continued to have visions of Christ, Mary, and the saints. St. Catherine was one of the most brilliant theological minds of her day, although she never had any formal education. She persuaded the Pope to go back to Rome from Avignon, in 1377, and when she died she was endeavoring to heal the Great Western Schism. In 1375 Our Lord give her the Stigmata, which was visible only after her death. Her spiritual director was Blessed Raymond of Capua. St, Catherine’s letters, and a treatise called “a dialogue” are considered among the most brilliant writings in the history of the Catholic Church. She died when she was only 33, and her body was found incorrupt in 1430.

“Everything comes from love,

all is ordained for the salvation of man,

God does nothing without this goal in mind”

Poems of St Catherine of Siena