Poems of St Therese of Lisieux

“Without love, deeds, even the most brilliant, count as nothing.”

St. Therese of the Child Jesus and the Holy Face, better known as “The Little Flower,” St. Therese of Lisieux, was born in Alencon, France in 1873. She was the youngest child of Louis and Zelie Martin, who were themselves declared “Venerable” by Pope John Paul II in 1994. All five of the Martin children who reached adulthood became nuns; four of them became Discalced Carmelites. 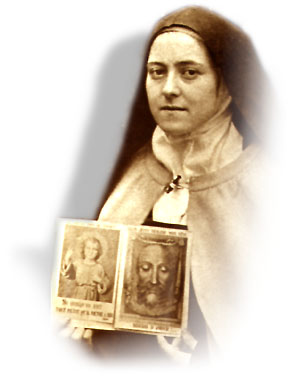 Therese was drawn to God from a very young age. At the age of 15, she received special permission from her bishop to enter the Carmel of Lisieux. There, Therese lived a life of humility, simplicity, and childlike trust in God. By word and example, she shared this “little way of spiritual childhood” with the novices in her community.

On the night between Holy Thursday and Good Friday in 1896, Therese experienced her first hemoptysis (spitting up of blood) from tuberculosis. Over the next 18 months, her condition steadily deteriorated. In the months prior to her death, she prayed for the grace to “spend my heaven doing good on earth” and promised that after her death she would send “a shower of roses” from heaven. Offering her sufferings for the salvation of souls, Therese died of tuberculosis on September 30, 1897, at the age of 24.

Upon her death, the nuns received permission to distribute Therese’s autobiography, comprised of material that she had written at the command of her superiors and the request of one of her sisters in the monastery. Published on the first anniversary of her death as “The Story of a Soul,” the initial printing of 2,000 copies quickly sold out. In the following years, hundreds of thousands of copies of her autobiography were printed, and it was translated into many languages.

As people read about this unknown nun and sought her intercession, letters started pouring into the Carmel reporting favors received through her prayers. By the time she was beatified on April 29, 1923, the Carmel was receiving 800 to 1,000 letters daily.

Most recently, Pope John Paul II named St. Therese a Doctor of the Church on October 19, 1997, World Mission Sunday. “Doctor of the Church” is a title given to a select few saints “on account of the great advantage the whole Church has derived from their doctrine” (Catholic Encyclopedia). She became only the third woman in the Church to be so honored, joining St. Catherine of Siena and St. Teresa of Jesus, foundress of the Discalced Carmelites.

In her life and her writings, St. Therese anticipated the teachings of the Second Vatican Council by showing that the path of holiness is open to all. She understood that what matters in the Christian life is not great deeds, but great love, and that anyone can achieve the heights of holiness by doing even the smallest things well for love of God. “All is well,” she wrote, “when one seeks only the will of Jesus.”