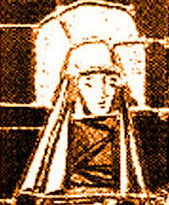 Most of what is known of Mechthild of Magdeburg comes from her book: references to court custom and courtly literature suggest she was from an educated family, as does the fact that she could read and write German (although she tells us that she does not know Latin). She had at least one brother who became a Dominican. In her early 20s, she left her home to go to Magdeburg (on the Elbe River); she appears to have lived most of her life there as a beguine, apparently in a community, perhaps as a superior. Near the end of her life, about 1270, she entered a monastery at Helfta which followed Cistercian custom.

She may have gone to Helfta because of the increasing restrictions being placed on beguines in Germany and the Low Countries. The women had received statements of papal approval in 1215 and 1233, but with approval went a requirement for clerical direction and eventually for control. In 1261, a synod meeting in Magdeburg ordered the local beguines to obey their parish priests, rather than relying on the mendicant orders for spiritual advice.

When she was in her mid-30s, on the advice of her Dominican confessor, Mechthild had begun to write down her love songs and visionary experiences. We know that some of these writings were quickly circulated because she speaks of the harsh criticism she received, as a woman writing about spiritual matters. But she continued to write until her death.

Fliessende licht der Gottheit (Flowing light of the Godhead) is divided into seven books: Books 1-5 were written during the 1250s, Book 6 in the 1260s, and Book 7 in the 1270s at Helfta. Within the seven books are 267 sections, from a few lines to several pages long. They include not only Mechthild’s visionary experiences, but also letters of advice and criticism, allegories, reflections, and prayers; they use prose and verse, dramatic dialogue and lyric.

Mechthild wrote in the dialect used in the north of Germany; fragments remain of this original, but our complete text is a translation made in the language of southern German about 60 years after her death. Yet scholars assume that the text as we have it reflects Mechthild’s words and, for the first six books, an organization determined by her and her confessor.

Poems of Mechthild of Magdeburg