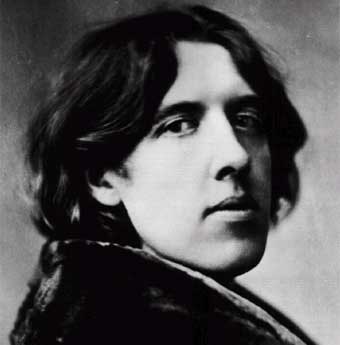 Oscar Wilde is one of the most iconic figures from late Victorian society. Enjoying a meteoric rise to the top of society. His wit, humour and intelligence shine through his plays and writings. For his sexuality he suffered the indignity and shame of imprisonment. For a long time his name was synonymous with scandal and intrigue. However with changing social attitudes he is remembered with great affection for his biting social criticism, wit and linguistic skills.

‘To get back my youth I would do anything in the world, except take exercise, get up early or be respectable.’
– Oscar Wilde

‘What of Wilde the man? He stood for Art. He stood for nothing less all his life.. He is still enormously underestimated as an artist and a thinker.. Wilde was a great writer and a great man.’

Oscar Wilde was born on 16th October 1854. in Dublin, Ireland. His parents were well known and attracted their fare share of gossip for their extravagant lifestyles. In 1964 his father Wille Wilde was knighted for his services to medicine. However his pride in receiving this honour was overshadowed by an allegation of rape by one of his patients. Although never proved, it cast a shadow over William Wilde.

Oscar Wilde proved to be a student of great talent. He was awarded a scholarship to Trinity College Dublin. Here he studied the classics, in particular developing an interest in the Greek philosophers and the Hellenistic view of life. From Trinity college he won a scholarship to Magdalen College Oxford University. He enjoyed his time in Oxford and was able to develop his poetic sensibilities and love of literature. He also became more conscious of his bisexual nature. For his increasing ‘femine’ dress he often received stick from more ‘traditional’ Oxford students. He was a brilliant scholar but also increasingly rebellious. In one academic year he got rusticated for turning up to College 3 weeks after the start of term. Thus after a while he lost interest in pursuing an academic career in Oxford and moved to London. It was in London that he was able to skilfully enter into high society, soon becoming well known as a playwright and noted wit. Oscar Wilde became famous throughout London society. He was one of the early ‘celebrities’ in some respects he was famous for being famous. His dress was a target for satire in the cartoons, but Wilde didn’t seem to mind. In fact he learnt the art of self-publicity and seemed to revel in it, at least up until his trial in 1898.

Oscar Wilde’s trial gripped the nation, the subject matter a source of intense gossip and speculation. For his ‘crime’ of homosexual acts Wilde was subject to 2 years hard labour in Wandsworth and then Reading Gaol. It is no understatement to say this experience deeply shocked and affected the previously ebullient Wilde. In some respects he never really recovered, on his release he left for Paris where he lived in comparative anonymity. However he retained his wit and continued to write, heavily influenced by his chastening experiences. Of these post gaol writings, his poem ‘Ballad of Reading Gaol is perhaps the most well known, illustrating a new dimension to Wilde’s writing.

‘I never saw a man who looked
With such a wistful eye
Upon that little tent of blue
Which prisoners call the sky.’

‘ I walked with other souls in pain.
Within another ring.
And was wondering if the man had done
A great or little thing.
When a voice behind me whispered low,
That fellows got to swing.’

From: Ballad of Reading Gaol

Although Wilde couldn’t return to his previous level of writing he developed new capacities, whilst retaining his sharp intellect. As Johnathon fryer commented on Oscar Wilde’s final part of life he was.

‘beaten but not bowed, still a clown behind a mask of tragedy.’

The Life of Wilde was turbulent and volatile. Never short of incident. It reflected his own inner paradoxes and revolutionary views. In some ways he was both a saint and sinner at the same time. Rightly or wrongly Wilde is remembered as much for his life as his writings. However he himself said.

‘I have put my talent into writing, my genius I have saved for living.’

His writings reflect in part his paradoxical view of life, suggesting things were not always as they appeared. As his biographer Richard Ellman said of Wilde.

‘Along with Blake and Nietzche , he was proposing that good and evil are not what they seem, and that moral tabs cannot cope with the complexity of behaviour’

Whatever one may make of Wilde’s life, his capacity for writing remains undeniable. His greatest work and comedy is arguably ‘The importance of being Earnest’ Here the plotline is thin to say the least but Wilde brings it alive through his scintillating repertoire of wit and biting humour.

‘Relations are simply a tedious pack of people, who haven’t got the remotest knowledge of how to live, nor the smallest instinct about when to die.’

‘Thirty-five is a very attractive age. London society is full of women of the very highest birth who have, of their own free choice, remained thirty-five for years.”

Wilde was not an overtly political commentator but through his plays there is an underlying critique of social norms that are illumined for their absurdities.

Wilde remains a fascinating character. One who lived life to the full, experiencing both the joy and tragedy of society’s vacillating judgements. With the distance of over a century it is easier to judge Wilde for his unique contributions to literature rather than through the eyes of Victorian moral standards. His quotes have become immortal a fitting tribute to a genius of the witticism

‘I am so clever that sometimes I don’t understand a single word of what I am saying.’