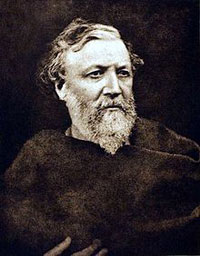 Robert Browning was born in Camberwell, a suburb of London. Young Robert spent much of his time in his father’s private library of 6000 volumes in several languages. The chief source of his education

Browning became an admirer of Elizabeth’s Barretts poetry in 1844. He began corresponding with her by letter. This was the start of one of the world’s most famous romances. Their courtship lasted until 1846 when they were married. The couple moved to Italy that same year and had a son, Pen, later in 1849.

Robert did not become recognized as a poet, until after Elizabeth’s death in 1861. After which, he was honored for the rest of his life as a literary figure.

Robert is perhaps best-known for his dramatic monologue technique. In his monologues, he spoke in the voice of an imaginary or historical character. Robert had a fondness for people who lived during the Renaissance. Most of his monologues portray persons at dramatic moments in their lives.