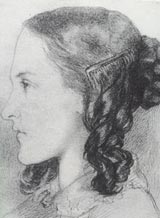 Christina Georgina Rossetti, one of the most important women poets writing in nineteenth-century England, was born in London December 5, 1830, to Gabriele and Frances (Polidori) Rossetti. Although her fundamentally religious temperament was closer to her mother’s, this youngest member of a remarkable family of poets, artists, and critics inherited many of her artistic tendencies from her father.

Judging from somewhat idealized sketches made by her brother Dante, Christina as a teenager seems to have been quite attractive if not beautiful. In 1848 she became engaged to James Collinson, one of the minor Pre-Raphaelite brethren, but the engagement ended after he reverted to Roman Catholicism.

When Professor Rossetti’s failing health and eyesight forced him into retirement in 1853, Christina and her mother attempted to support the family by starting a day school, but had to give it up after a year or so. Thereafter she led a very retiring life, interrupted by a recurring illness which was sometimes diagnosed as angina and sometimes tuberculosis. From the early ’60s on she was in love with Charles Cayley, but according to her brother William, refused to marry him because “she enquired into his creed and found he was not a Christian.” Milk-and-water Anglicanism was not to her taste. Lona Mosk Packer argues that her poems conceal a love for the painter William Bell Scott, but there is no other evidence for this theory, and the most respected scholar of the Pre-Raphaelite movement disputes the dates on which Packer thinks some of the more revealing poems were written.

All three Rossetti women, at first devout members of the evangelical branch of the Church of England, were drawn toward the Tractarians in the 1840s. They nevertheless retained their evangelical seriousness: Maria eventually became an Anglican nun, and Christina’s religious scruples remind one of Dorothea Brooke in George Eliot’s Middlemarch : as Eliot’s heroine looked forward to giving up riding because she enjoyed it so much, so Christina gave up chess because she found she enjoyed winning; pasted paper strips over the antireligious parts of Swinburne’s Atalanta in Calydon (which allowed her to enjoy the poem very much); objected to nudity in painting, especially if the artist was a woman; and refused even to go see Wagner’s Parsifal, because it celebrated a pagan mythology.

After rejecting Cayley in 1866, according one biographer, Christina (like many Victorian spinsters) lived vicariously in the lives of other people. Although pretty much a stay-at-home, her circle included her brothers’ friends, like Whistler, Swinburne, F.M. Brown, and Charles Dodgson (Lewis Carroll). She continued to write and in the 1870s to work for the Society for Promoting Christian Knowledge. She was troubled physically by neuralgia and emotionally by Dante’s breakdown in 1872. The last 12 years of her life, after his death in 1882, were quiet ones. She died of cancer December 29, 1894.