Note information about Chandidas is hard to ascertain because up to 4 poets may have gone by the name of Chandidas. The historical figure most closely identified with Chandidas is said to be Baru Chandidas. Chandidas wrote many lyrical poems in praise of Krishna. Chandidas is also credited with placing great emphasis on man.(one of India’s first humanists. He is attributed to have said.

‘sabar upare manus satya tahar upare nai’(The supreme truth is man, there is noting  more important than he is). 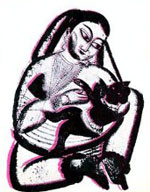 Chandidas was a Vaishnavite poet saint of the fourteenth century. Born in a Brahmin family, he belonged to a society ridden with religious bigotry and strong Brahminical authoritarianism. Though he was the disciple of a Brahmin priest who believed in harsh and ascetic principles, Chandidas’s love for poetry inevitably came in the way of his religious devotion. He was also a bit of a romantic, and spent hours idling near the river, where Rami, the washerman’s daughter came to wash clothes. Rami, the daughter of a low-caste, was also a young widow, and barred on both counts from any social intercourse with a man like Chandidas.

But she was a cheeky young thing all the same, and had a divine voice. Chandidas would sit listening to her songs for hours. Rami was aware of the young Brahmin’s interest in her, and was herself a great admirer of his poetry. Inevitably, they were drawn to each other. In the closed-in community of the village, their romance could not remain a secret. Also, the local rich landowner, Bijoynarayan, himself a connoisseur of women, had his eyes on Rami. But Rami despised him for his double standards. Bijoynarayan, being an upper-caste and rich man, would not share a meal with the low-castes, nor would he contaminate his body with their touch. But when it came to women, his greed would overcome all social taboos.

Rami’s rejection and her outspoken condemnation of his behaviour roused Bijoynarayan’s ire. He now made it his mission to persecute both Rami and her community, and Chandidas’s romance became a major scandal. Though the strength of Rami’s personality sustained Chandidas for a while against the attacks of the Brahmins, he was still in awe of the temple priest, whose overpowering hold on the young man finally led to his denouncing Rami in public and agreeing to perform a religious ceremony in the temple to repent for his past sins. Rami, refusing to believe that Chandidas would actually disown her, battled with Bijoynarayan’s hirelings to reach the temple on time. Distraught and bleeding with wounds inflicted upon her by the landowner’s men, she confronted Chandidas in the presence of his religious mentor. Chandidas, believing in a more just and loving god in place of the harsh divinity offered by the priest of the temple, renounced his religious bindings, dissociated himself from the orthodox Brahminical order, and left the village with Rami.