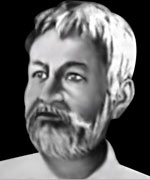 Kamalakanta was born in Burdwan India in the late 18th Century. From an early age he expressed an interest in spirituality and later in life Kamalakanta received initiation into Tantric Yoga from a Tantric yogi named Kenaram Bhattacharya. His songs made him famous during his lifetime. Because of his fame as a singer poet the Maharaja of Burdwan, Tej Chandra asked Kamalakanta to be his Guru. Throughout his life Kamalakanta was a great devotee of Kali and composed many impassioned and devotional love poems to the Mother.

It is said that the Divine Mother in her aspect of Mahakali wishes her sincere devotees to make the fastest progress. Kali is often depicted as the great destroyer of ignorance and hostile forces. The poetry of Kamalakanta displays this heroic attitude, imploring Kali to destroy limitations and bondage. The poetry of Kamalakanta also displays a profound faith in his all powerful Kali.

“The earth quakes under Your leaps and bounds.
You are frightful with that sword in Your hand .”

Whilst Kali is often depicted as a black and terrifying form, this however is just one aspect of hers as a destroyer of ignorance. Kamalakanta also alludes to the other aspect of Kali as he states in his poem – “Is my Mother Really Black?”

“If She’s black,
how can She light up the world?
Sometimes my Mother is white,
sometimes yellow, blue, and red.
I cannot fathom Her.
My whole life has passed
trying. ”   (1)