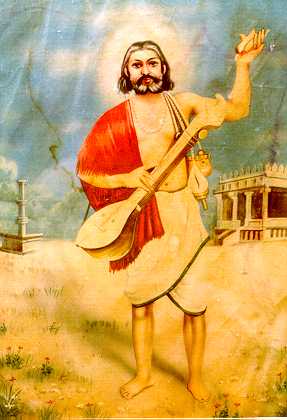 Saint-Poet Kanakadasa (c 1509-1609 A.D.) belongs to the tradition of Haridasa literary movement which ushered in an era of devotional literature in Karnataka. Scores and scores of Haridasa have composed songs in praise of Krishna (incarnation of Vishnu). ‘Haridasa’ stands for ‘servant of Hari’, is another epithet of god Krishna. Right from 14th century to 19th, we find several Haridasas who wrote devotional compositions which could be set to music with simple instruments like Tanpura, and Tala (cymbals). They wrote kirtans, bhajans, prayers, lullabies, festival songs, and house-hold-chore songs. Written in simple and spoken Kannada, they had universal appeal.

Purandaradasa and Kanakadasa are the foremost among Haridasas. Besides conveying dvaita (dualism) tenets, they preached kindness and equanimity in a world full of sorrows. They condemned superstitions, hollow rituals and upheld virtues of a pious life.

No biographical details of Kanakadasa are available. Tradition makes him a member of shepherd (Kuruba) community who as chief (nayaka) of security forces under a local king. His family deity or the deity he worshipped was Adikeshava of Kaginele, presently in Haveri district. Kaginele, now a village, was a prosperous place and trading center in middle ages.

Kanakana Kindi (window of Kanaka) enjoys a special place at the Shri Krishna temple of Udupi. There is a legend that Kanakadasa, who was a non-Brahmin, wanted  to have a ‘darshan (encounter) of the idol.  He was not allowed into the shrine by orthodox Madhwas, as Kanakadasa was not a Brahmin by birth. Kanakadasa then started singing praise of Shri Krishna and was lost to outside world in a corner outside the temple. Suddenly there was a breach in the wall, where Kanaka stood, and Lord Krishna offered full darshan bending towards poet. A small window was constructed at the breach later. The idol has still a bend!

Today that window stands as a tribute to the unique saint of Karnataka. Almost all devotees who visit Udupi Krishna temple try to have a peep at the idol, through the petty window wishing to relive the ecstasy, Kanaka had at the divine ‘darshan’. It is also a memorial to Kanakadasa and eclectic Hindu belief that devotion, poetry and sainthood are above caste and creed and certainty above orthodoxy.