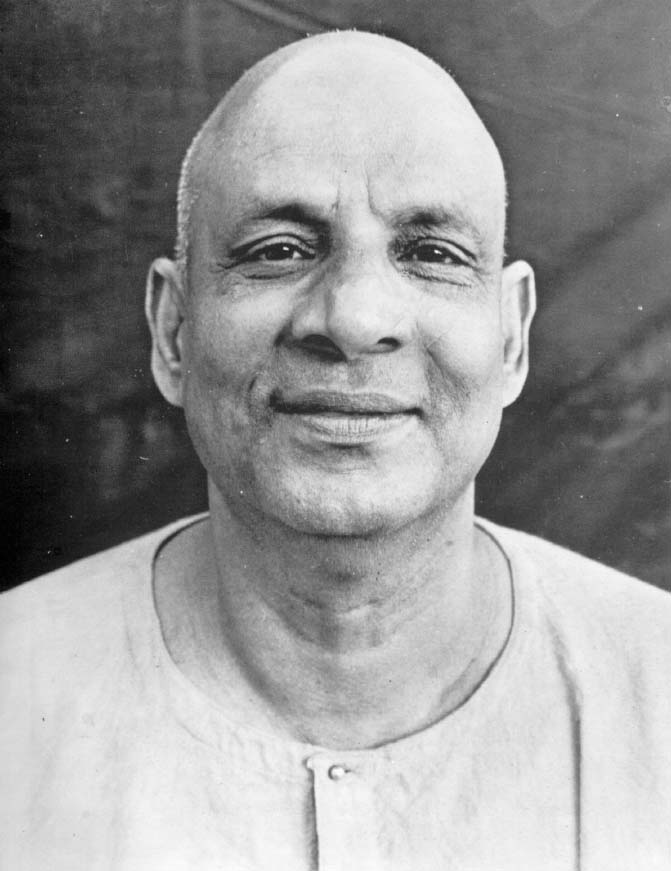 Swami Sivananda, one of the greatest Yoga masters of the 20th century, is the inspiration behind the Sivananda Yoga Vedanta Centers.

Born in 1887 in Pattamadai, Tamil Nadu, South India, Swami Sivananda whose name was then Kuppuswami, was a brilliant boy at studying as well as gymnastics and naturally inclined toward spiritual and religious practices.
His parents were very devoted to Lord Siva and Kuppuswami was eager to join them twice daily for worship (Puja) and Kirtan (Mantra chanting).
His natural selfless spirit lead him to a career in the medical field. His amazing eagerness and ability to learn and assimilate his studies earned him the respect of his professors who invited him to attend surgeries while still in his first year of medical school.

The young Dr. Kuppuswami felt a strong urge to go to Malaysia where he felt there was great need. In a short time he was given the responsibility of running a hospital. During these years Dr. Kuppuswami was renowned as being both an excellent doctor and a true humanitarian. Very often he waived consultation fees for patients too poor to afford his services and on many occasions provided medicine for free to his neediest patients.
One day Dr. Kuppuswami had the opportunity to cure a wandering Sannyasin (renunciate or Monk) who then gave the doctor instruction on Yoga and Vedanta. From that day on his life changed, and gradually Dr. Kuppuswami became more introspective and could not stop pondering the great questions of life. Now he felt the need to help people on a more profound level, not just healing their physical body, but helping them to find a cure for all suffering.

Filled with a tremendous desire for spiritual growth and enlightenment Kuppuswami went to North India in search of his Guru. After spending time in Varanasi (Banaras) he travelled north to the Himalayas. There in the holy town of Rishikesh (which means “the abode of the sages”) Kuppuswami discovered his Guru who gave him Sannyas (a monk’s vows of renunciation). After taking these vows, Swami Sivananda Saraswati, as he would be known henceforth, started an extremely intense daily Sadhana (spiritual practices) and Tapas (austerities) for the next 10 years or so. By the end of that period many co-Sadhus felt drawn to Swami Sivananda for his instruction and his spiritual inspiration.

From that time Swami Sivananda became one of the most prolific Yoga teachers who has ever existed. Although he rarely left the little town of Rishikesh (with only 2 India tours and no visits abroad) Swami Sivananda’s teachings spread quickly throughout our entire planet. He personally wrote – by hand, no computers at the time 🙂 – more than 200 books on topics connected to Yoga and Philosophy. He wrote in a style that is very direct and bursting with dynamic, spiritual energy. As a result many who read his books felt their lives deeply touched and transformed and so came from all of India, all of the world, to learn from him directly, and to bask in his holy presence. The teachings of Master Sivananda are summarized in these 6 words:

In 1957, Swami Sivananda sent his devoted and industrious disciple, Swami Vishnu-devananda to the West where he then established the International Sivananda Yoga Vedanta Centers. See: Swami Satchidananda